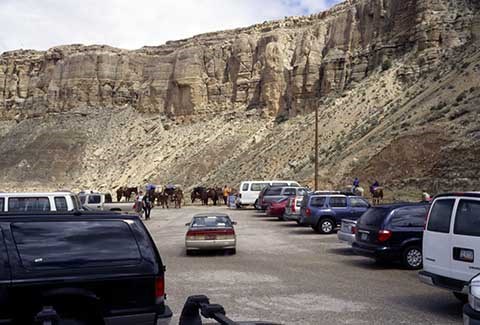 Tourism on the HAVASUPAI Reservation should be at a standstill. Instead, the US Department of Forestry continues to promote an inform  the public about tourism opportunities at the HAVASUPAI locale — leading them to witness animal cruelty beyond their comprehension.

Tour participants report having nightmares and anxiety attacks following a visit to HAVASUPAI Falls in which not only animals are abused but witnesses, attempting to stop the perpetrators are ridiculed and even threatened.

The HAVASUPAI people are a tiny tribe that has been allocated an amazing public resource — it isn’t their inherent right to abuse animals, tourists and activists at will.

The horses and donkeys owned by the Havasupai are unfortunate animals, brought to sale barns in the region and sold to the highest bidder, typically at very low prices.

They’re then essentially ‘worked to death’ by the Havasupai, mistreated and overworked, overloaded and beaten when they fall. They’re driver into and out of the canyon, ten miles each way, often at a dead run. The trails have areas of extreme danger, hooves and ankles are damaged and even broken off when a horse or donkey inadvertently steps into crevices in the rocks — and falls from the highest trails are common, at times pulling a string of donkeys and horses onto the rocks far below. Those that survive the fall are left to die at the base.

Although many tourists have complained about the horrific abuse these pack animals suffer — along with a complete lack of both FOOD and WATER for them — the Havasupai have shown themselves to be completely unresponsive to complaints, even verbally attacking those that attempt to convince them to render care to animals in crisis.

Practices such as these are unthinkable in this day and age — and if anyone reading this article were to participate or perpetrate such grievous treatment upon sentient beings of any kind they could expect to be properly prosecuted — and for good reason.

That a virtually unknown tribe comprised of only about forty families and situated essentially at the head of one of the most prestigious naturally beautiful landmarks in the entire nation should be able to perpetrate such unfathomable crimes against animals in full view of the public at large and yet escape virtually unscathed by the unbelievable public backlash that should be happening is absolutely astounding.

This is the age of the Internet, after all. News travels at the speed of light and beyond.

It’s not just their animals that suffer, either.

The Havasupai tribe has had numerous run-ins with those complaining that their Autistic and mentally or cognitively challenged children fare little better than the animals that find themselves imprisoned on this reservation.

Two teachers that attempted to expose these issues were summarily fired — and the lawsuit that followed was mishandled, resulting in an utter failure, even though the complaints are widespread and the concerns have been completely and properly verified.

Just two of the families running the Havasupai Tribe, critics contest, are in control of everything — including the very large sums of money these tribal ‘activities’ generate every year.

Complaints have done nothing to generate an inclination to change on the part of tribal leaders. Reports of animal abuse date back to the 1930’s and nothing, really, has changed.

It’s not ‘just’ this species of that — the Havasupai are accused of not having regard for any species, abusing the dogs on the reservation as indiscriminately as they do horses, donkeys and mules.

And, in spite of the fact that they’ve been investigated, charges have been brought and convictions for felony animal abuse have occurred — the rampant abuse on the Havasupai Reservation continue.

Only a full on BOYCOTT of the Havasupai and their reservation will result in stopping the horrific animal abuse still happening on the reservation.

As unfathomable as the reports of animal abuse on the reservation have become, tribal law enforcement has continued to be largely unresponsive.

Thus, the State of Arizona [the reservation is in Supai, Arizona] and the Department of the Interior along with the Department of Forestry all have some level of jurisdiction on the Havasupai Reservation and owe it to the citizens of the United STates to address the concerns regarding Havasupai a animal abuse.

Peta, having become aware of the situation there have run separate articles outlining their concerns, asking for assistance in addressing the problems there. 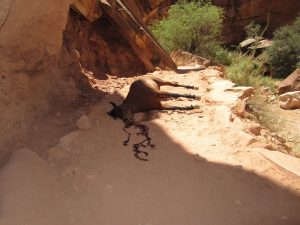 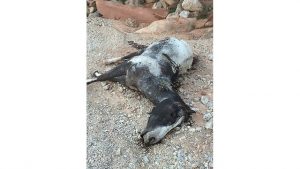